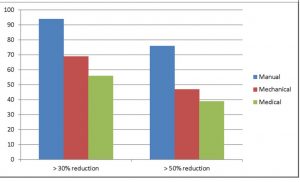 SUMMARY OF BACKGROUND DATA:
Low back pain (LBP) is one of the most common conditions seen in primary care and physical medicine practice. MTM is a common treatment for LBP. Claims that MAM is an effective alternative to MTM have yet to be substantiated. There is also question about the effectiveness of manipulation in acute and subacute LBP compared with UMC.

METHODS:
A total of 107 adults with onset of LBP within the past 12 weeks were randomized to 1 of 3 treatment groups: MTM, MAM, or UMC. Outcome measures included the Oswestry LBP Disability Index (0-100 scale) and numeric pain rating (0-10 scale). Participants in the manipulation groups were treated twice weekly during 4 weeks; subjects in UMC were seen for 3 visits during this time. Outcome measures were captured at baseline, 4 weeks, 3 months, and 6 months.